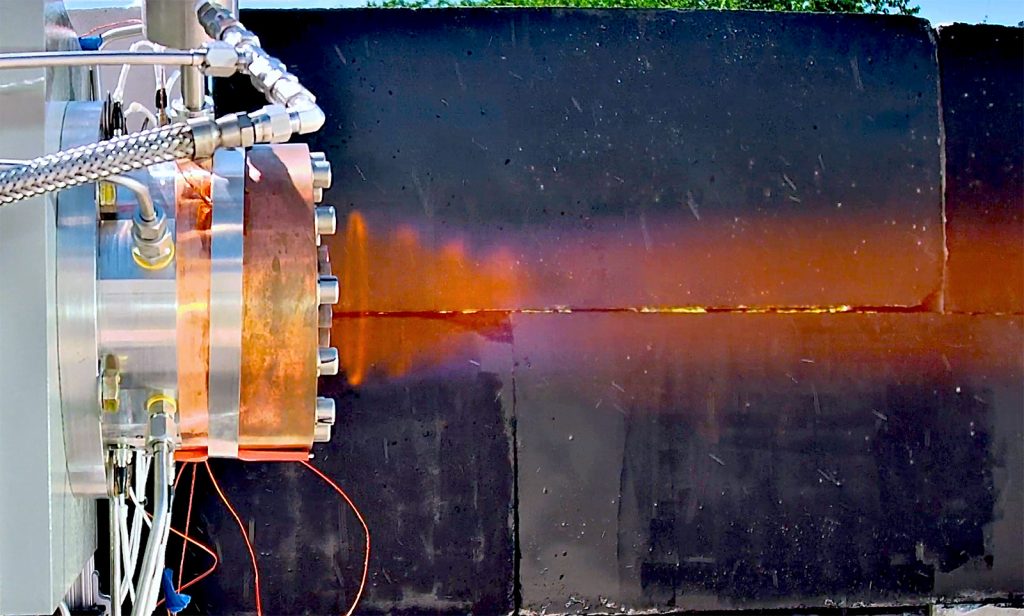 Detonation engines provide higher performance as compared to a typical rocket engine. Our vehicles can go faster and further than existing systems with the same amount of fuel. Rotating detonation means the supersonic combustion happens continuously inside the engine, and our video shows the detonation wave moving around the engine at supersonic speeds. Engine testing was completed at Venus Aerospace Headquarters, located on Spaceport Houston, after 3 months of testing. The test stand was designed and built over 12 months, and all within 18 months of relocating the company from California to Houston.

Proving this technology is a critical step for bringing reusable high speed commercial travel to the general public in a number of years. “Venus Aerospace continues to impress me with both their intentional approach to technology progression and buying down operational risk in years, not decades,” says Jim Bridenstine, former NASA administrator, military aviator, and U.S. Congressman. “This important milestone regarding the rotating detonation rocket engine technology represents a key advancement towards real flying systems, both for defense applications and ultimately commercial high-speed travel. And they’ve done it in the context of building a world-class team and work experience – one that can move quickly but also with an eye towards flight test, certification, safety, and production.”

When operational, the Venus “Stargazer™” will connect distant cities of over 5,000 miles in under an hour. Venus will begin hypersonic RDRE flight testing with a 20-foot drone to support both national security and internal technology development.

Only a few companies and academic institutions have achieved rotating detonation, and Venus Aerospace is the first company to demonstrate this particular room-temperature storable propellant combination, which will allow hypersonic flights to be further, faster, and more often. “We now have both the technical knowledge and engineering to fully advance into next steps of development and flight testing,” says Dr. Andrew Duggleby, CTO and co-founder of Venus Aerospace. “In parallel, we have advanced our aerodynamics, avionics, and heat management technologies. Now it’s time to start putting all the pieces together, first with our small Mach 5 drone, and ultimately the Mach 9 “Stargazer™”, our full-scale passenger plane, which will have dual usage for both commercial and military applications,” says Duggleby.

“Since closing our initial funding in January 2020, Venus Aerospace has continued to push forward technology while building an incredible team, backed by world-class investors,” says Sarah “Sassie” Duggleby, CEO and co-founder. “It’s been exciting to watch our team continue to execute and buy down risk, while also creating a “people-first” culture. This is just the beginning of incredible milestones for our team, and I’m excited to see what the future holds for Venus Aerospace.”